When Peter and Wendy purchased a large tract of land in Bremen, Maine, they decided to return that land to agriculture.  Rocky and thickly forested, goats were a natural choice to help in recovering the landscape.  After extensive research, they opted for Cashmere goats.  Wendy told Peter she was buying him two Cashmere goats for his birthday, and, after visiting Black Locust Farm in Washington, Maine, they came home with eleven gorgeous Cashmere goats!

So began a journey together, building Springtide Farm.  Learning to gather the fiber in the spring as it was shedding proved to be a task for the pathologically romantic, as each goat would take up to an hour to comb out, and that hour could easily be spread over several combings. Once the fiber was gathered, then what?  First they needed to learn whether the fiber was of good enough quality to even be called Cashmere, so they had each goat’s fiber tested by the lab, and found that their fiber was good on most goats, and excellent on a few.  They also attended trainings and Cashmere goat shows to develop their expertise, and Peter quickly became a certified Cashmere goat judge.  Mini-Mills, of Belfast, Prince Edward Island, were then developing cottage industry sized machinery that could handle the processing of such a fine fiber as Cashmere.

Wanting to improve the quality of their goats, they invested in bucks that had outstanding fiber, and had the silver colored guard hair for which they have become well known.  JRW Silver Bart, from Goat Knoll Farm in Dallas, Oregon, proved to be an incredible purchase for Springtide.  His offspring showed consistent and constant improvement in just one generation.  They continue to have each goat’s fiber tested in the lab annually, and cull animals that are not very good to excellent in both fiber and conformation.  With as many as 50 kids tumbling about in the spring, the herd expanded and has resulted in Springtide Farm being an internationally recognized breeder of premium quality Cashmere fiber and goats.

In 2005 Springtide began offering Goat Husbandry workshops, assisting others in goat farming and in raising Cashmere goats in particular.  Realizing that there was no written standard for Cashmere goats, Peter began gathering what written and anecdotal information that he could, and interviewing “old time” Cashmere goat farmers.  After getting reams of material, he wrote the standard for the North American Cashmere goat breed, a standard which has been adopted by the Cashmere Goat Association and the Northwest Cashmere Association.  In the Fall of 2019, the North American Cashmere Goat was recognized by the UDSA as an official goat breed.

But what about the fiber???????  Joined by daughter Michaella (“M”) Warryn, they began selling fiber at fairs, designing patterns, and expanding the business.  With M at the helm, they have found other growers of outstanding fiber to increase their inventory, and you can now buy the fiber on line as well.  M’s designing and art background have brought stunning new colors and patterns to Springtide, and the choices vary and increase almost every day.

Following the capricious nature of goats, the Springtide goats want due recognition for all the teaching that they have also contributed along the way:

“No, fences are to keep others out, not us in.  Think gated community.”

“You need to be here right now, because I want you to feed me, or pet me, or appreciate me, or just keep me company as I lie in the sun.”

“I’m pretty sure it’s breeding season, and I like Axel, no Silver Bart, no Samson, oh heck, just bring them all over.”

“I want company!  I’m about to kid, well, later today, or maybe tomorrow if the weather is nice.”

“M, you need to come and comb me now.  I’m shedding and it itches.”

“Wendy, do you have that new browsing area fenced yet?”

“Michelle, I’m pretty sure that Wendy forgot to tell you that I am supposed to get a double ration of oats even though I am admittedly a little over weight.”

“The word ‘capricious’ comes from caprine, you know, and that is Latin for ‘goat.’”

After years of listening and learning, Peter, Wendy, and M have indeed developed a stunning herd of North American Cashmere goats.  Rocky and rugged terrain, lots of room to browse and frolic, and obedient humans, the Springtide herd is friendly, feisty, and fabulous.

Schedule a visit, the goats are always ready to show off and there is always outstanding fiber to fondle! 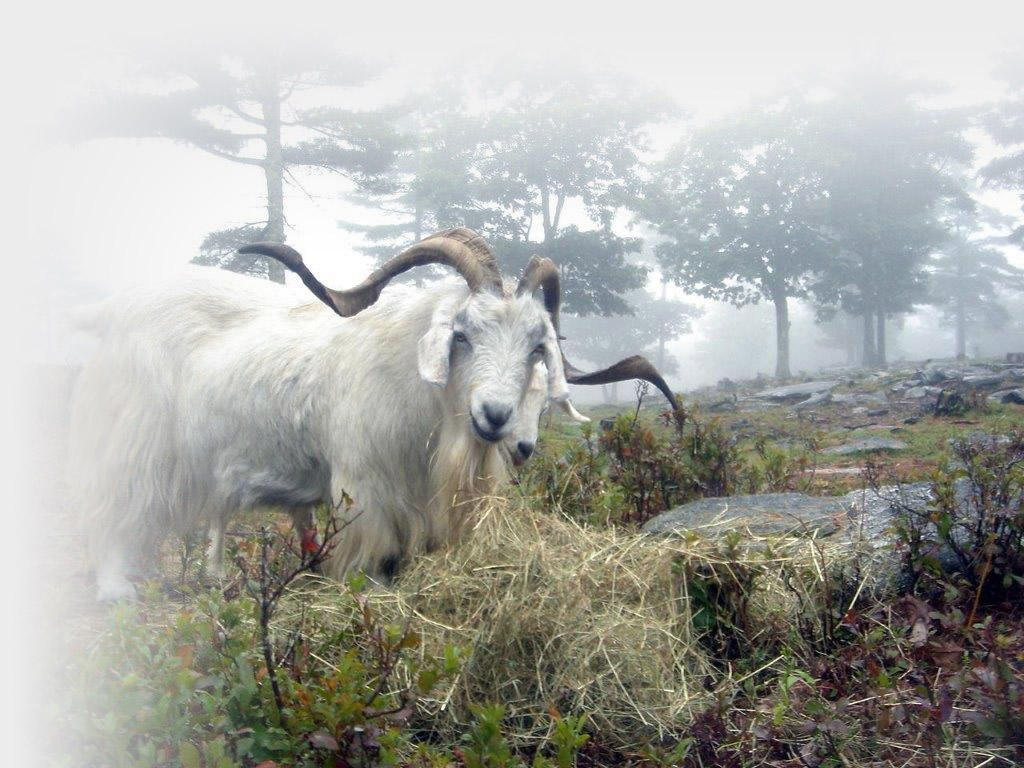